Why (Tuesday’s) SpaceX launch is a big deal | Michael Belfiore 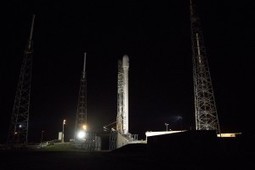 …”There are billions of dollars in key Congressional districts riding on the Congressionally mandated big budget boondoggle known as the Space Launch System (less affectionately known by some as the Senate Launch System.), or SLS. If a private company demonstrates the same capabilities as the SLS at a fraction of the cost, the emperor will stand revealed in all his nude glory, and it will be even harder to justify spending all those billions of dollars on a rocket that is destined to go nowhere. SpaceX is precisely on track to do that little thing.

“Expect to see NASA funding for commercial crew to get ever tighter, to dry up altogether, or to go to some less capable outfit as SpaceX approaches manned launches.

“All of which is to say that in order to keep its own manned space program flying, SpaceX needs a hefty revenue stream that’s independent of the US government. Hence its satellite launch business.”

This entry was posted on December 3, 2013 by thenewspacedaily. It was filed under Uncategorized .